It was going to happen eventually, but I didn’t expect to be as nervous as I was…

Along with running the marketing for VI and hosting our podcast, The Insider, like everyone who works here, I also am a magician. I’m 50 this year and got Royal Road for Christmas when I was 11. I’ve been into this for quite some time.

I perform close-up magic, mentalism as the character Tony Sagittarius and also stand-up magic. This gig was for Arundel festival and I’ve been doing it every year for the last nine years. Aside from last year, obviously.

It’s essentially a parlor magic show performed on the street, and I get a mix of kids and adults so have to pick magic tricks that would work for both segments. It’s normally for around 80-100 people so the material I use is pretty much parlor. 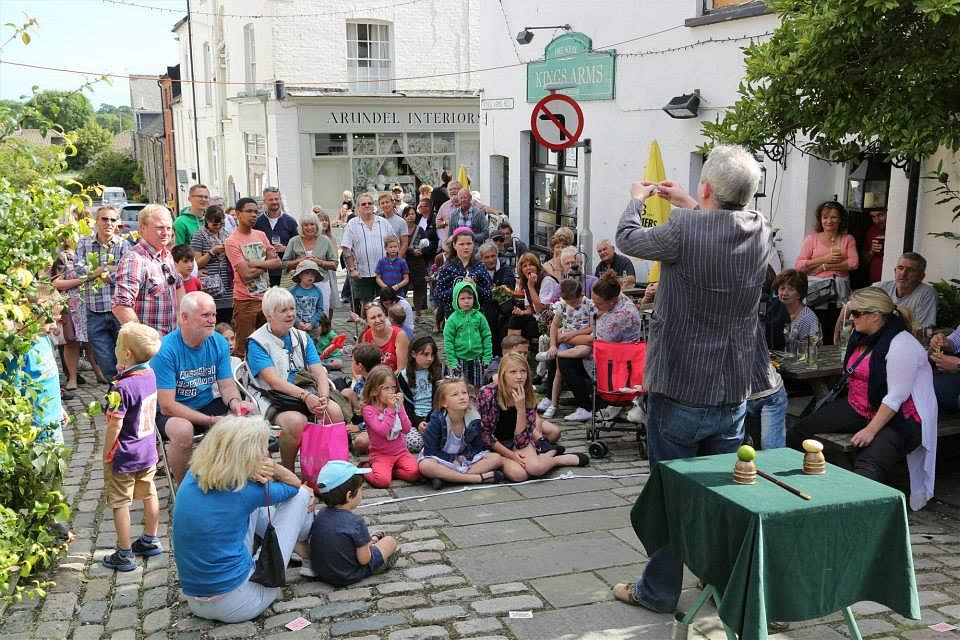 I wasn’t expecting to be asked to do it this year, and wasn’t prepared in any way. I got a message from the booker on Wednesday asking if I could do a show on Saturday.

Panic hit me. I’d not performed for two years thanks to Covid. I’d not even really opened my stand-up case. (And yes, I did find the usual decayed half a lemon I always forget to take out after a show).

My initial thought was to sack it off. I wasn’t ready, there was so much material I couldn’t do because I wanted to adhere to social distancing. No Sponge Bunnies, no Coloring Book, no one could be on stage, no playing cards selected, no picking up kids à la Williamson.

Then I read a Stan Lee quote:

“I used to be embarrassed because I was just a comic-book writer while other people were building bridges or going on to medical careers. And then I began to realize: entertainment is one of the most important things in people’s lives. Without it they might go off the deep end.”

This sounds pretentious, but I realised I sort of owed it to the people coming to the festival to give them the entertainment they’d all missed over the crazy time the world has been in. Now, I am not suggesting my act is astonishingly good, but just it’s something I can do, and that people seem to enjoy watching!

So I put on my big boy pants and started to work out material I could do. Here’s my initial list:

I’m pretty good at stretching out material, but that was never going to last an hour. How could I have things selected?

I slept on it.

My daughter, Isis, is seven and loves magic. She has a few tricks she can perform. We do a two-person version of Animinimals where I fail to blow up the balloon and she comes up and with just a little handy shuttle pass, I “hand” her the balloon and she turns it into the Animinimal. She also has been able to find a “freely selected” card since she was two. Why do I mention her? Because she also has a litter picker she loves using to help clean up the town.

Cards and other items could be selected using her litter picker! It would be socially distanced, responsible, and also funny. I added in the idea of cleaning the litter picker between uses with a big can of spray disinfectant.

The show was now saved. Here’s the set list:

A great mix of material for kids, that the grown-ups will find entertaining and material more suited for grown-ups but that the kids would find funny. I’d never performed Two-Headed Prediction before, but thought using the kids vs the adults presentation would work well. (Spoiler: it REALLY did and kills much more than I had anticipated).

The Isis Card Trick is normally just a force and then she finds the selection in a ribbon spread. Instead of Isis finding the card, I had the idea of her bear being a mind reader. So I forced the Ace of Spades using a Hindu Shuffle force for social distancing, and then the bear read the person’s mind and whispered it to her and she revealed it. Funny and fooling (for non-magicians).

The Homing Card, Clarity Box and Bill In Lemon all needed a signed item. So a big Sharpie was also disinfected and handed out with the litter picker.

Dippy Duck didn’t need to be signed, and for Two-Headed Prediction I just stood the selected cards up on my case, backs facing the audience.

But the one thing that hit me harder than anything was the nerves. I normally get a little tingly about five minutes before a show, but with this, I was incredibly nervous the night before, and all morning ahead of the gig. Nerves like I’d not had before. I was anxious I’d forget my scripts, my timing would be off, the litter picker idea would create so much dead time, my moves would be rusty, etc etc. Anything and everything was worried about.

The show is a street show, outside my local (and the best) pub in Arundel, The King’s Arms. I never use any amplification and just project my voice very loudly.

As soon as I started Six Card Repeat, very loudly, the nerves vanished. When I got the first round of applause at the end of that routine, the flood of different happy chemicals in my brain made me overjoyed, and when I looked out to see about 100 people smiling and laughing I wanted to thank Stan Lee for what he said. Entertainment is the most important thing in people’s lives and we, as performers, are in a unique position to be able to give that as a gift to strangers.

I’d forgotten that over the last two years of not performing. And I am glad I now remember it again.