We ended the first part of this blog with a question, “Why do we need 26 identical ‘force cards’ in our Svengali Deck?” As we deconstruct the deck, this is one of the first and most important considerations.

Throwing the “force cards” away was, in fact, a revelation. Those 26 duplicate cards are part of the Svengali Deck’s heart and soul. If you remove them, does a Svengali Deck remain? Well, no it doesn’t; only the mechanical engine remains. This can now be repurposed in new ways, other than that imagined and conjured into reality by Burling Hull. With the 26 duplicate cards disposed, we can create NEW configurations with the FOUR available sides and the short/long skeletal structure.

The results are lovely: The Parity Deck, The Imagination Deck, and The Chimera Deck, are examples of the approach. They revealed themselves, successively, after initially dropping the “blinders” created by over a 100 years of using those 26 identical force cards! Incidentally, all three decks are supplied with the book (custom printed and trimmed by the USPCC), so you can put them directly to use without any arts and crafts.

Of the three approaches, The Parity Deck is, in my opinion, the most useful, and the one we put to good use in the book. Here is a deck that contains all 52 cards, can be examined, and you can even perform most of your favorite card routines with it. Yet, its built-in “engine” allows for many effects that require no skill other than that used with a traditional Svengali Deck.

Some of the effects are subtle, some are over-the-top. Take, for instance, the striking full-deck Oil & Water routine (your audience interlaces the entire deck, red/black/red/black and then cuts the deck into to equal packets. You’ve not touched the deck at all. Instantly, and again without touching the cards, you separate the colors: 26 black cards in one pile and, and 26 red cards in the other. To follow, there’s a mind-boggling reverse kicker—the entire deck re-interlacing red/black/red/black throughout! Did I mention it was examinable? This deck is an awesome “EDC.”

To explain: A Svengali Deck uses up one batch of sides (traditionally, the faces of the long cards) to display a mix of random card-faces, implying a full deck. I’ve kept this static with all the configurations so that a full deck of faces can be shown at call. This is important. An apparently full deck of faces implies that there is only one more surface in play—those on the flip-side, a set of backs. We in fact know, through our explorations, that we have a total of THREE additional surfaces to play with. Each of these can be brought into view, as required, through nothing more than familiar Svengali Deck handlings. 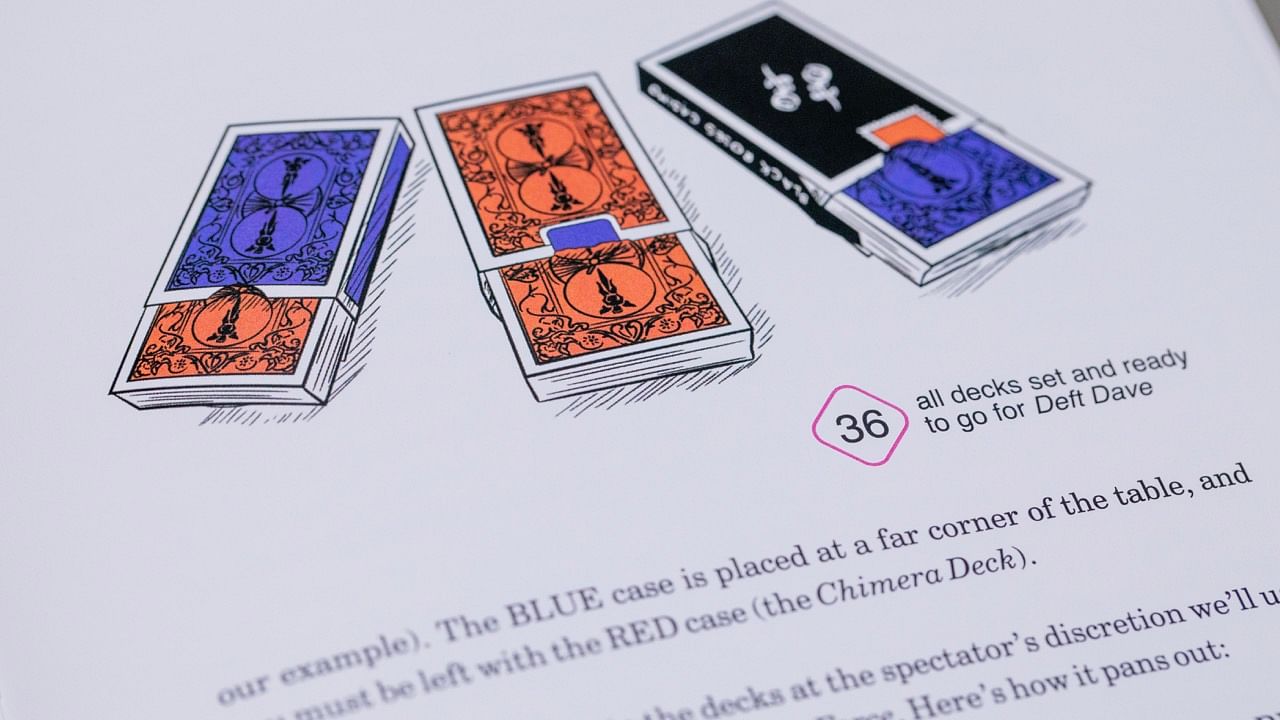 As an example: For the purposes of The Chimera Deck (a triple color-changing deck effect), I specified THREE surfaces as BACKS, leaving one surface for a random spread of card faces. The result is a deck that, like the definition of “chimera,” is three-faced (actually, it’s three-backed). The deck can be displayed as having all red backs, all blue backs AND then a third, high-contrast back-design (a bright and solid marigold color was chosen for the supplied deck). A complete deck’s worth of faces can be shown along the way as a “cancelation” device—implying that the deck is normal.

The repurposed skeleton is put to use in a pseudo-gambling routine called “Deft Dave.” This involves three decks being magically switched with each other, and plays real big allowing you to fill the table with broad and generous ribbon-spreads.

Another angle is taken with the Tardian Case. This collapsable card case (foiled and handmade just for this project in Malta) is a pretend “Tardis.” Just like the famed time machine from the British TV series, Doctor Who, this little box seemingly travels through time-space, exploring your card collection. You create the illusion of removing three entire decks from the case, testament to the “it’s bigger on the inside than the outside” gag—a running joke that has become such a part of the Doctor Who culture.

The third special deck supplied with the book is The Imagination Deck. Here, a blank playing card is imagined into existence by a spectator. One moment it’s blank, then it’s printed with whatever card she names. It’s a striking moment. The performer attempts the same thing, but his card prints as a rough sketch only, his imagination not as strong as the spectator’s. He tries with the entire deck, only to print a hole pack of sketches. The spectator comes to the rescue and wishes the deck to be fully detailed. Amazingly, the deck does just that—becoming fully printed and factory spec!

This particular reworking of the Svengali engine is the opposite placement of the surfaces to that which we used in The Chimera Deck. Here, I’ve employed THREE surfaces as FACES, leaving one surface for backs. The deck can be displayed as having all blank faces, all partially sketched faces AND then fully-printed faces. Backs can be shown along the way as a “cancelation” device—implying that the deck is normal.

Many more effects and techniques remain to be explored. How about an entire routine with advertising cards collected from an assortment of decks—all with different sales pitches on their faces, and different-colored backs? A card is freely selected, then—demonstrating the “power of advertising”—ALL the cards become printed with the same advertising face and back design as the selected card!

Think about a Svengali Deck that forces TWO cards, not one. What about incorporating a repeated Koran stack (or other sequence, like CrossRoads or Kennedy’s Mind Power sequence) into the deck? With any of these approaches you’ll be able to show a regular deck—faces and backs—and then perform some amazing mind-reading magic.

The possibilities are many. They’ve come about because we stripped away what we knew about the Svengali Deck and then reimagined the skeletal structure and its nuances.

As an analogy, think about the famed “Genii In A Bottle” story. We know it so well: The bottle (lamp), the genii, the 3 wishes. It’s ordered, structured, familiar, and we leave it alone because it works (just like we’ve left the Svengali Deck alone for 100 plus years—because it works).

Let’s get brutal: Let the genii out of the bottle.

NOW, throw the bottle away—get rid of it!

Your genii is left with no home, no point of reference. What to do? As in the Stephen King story—related to in Part 1 of this blog—something new can’t help but come out of the situation. Just be observant and dare to go where no one has before.

I look forward to your feedback, there are many things to be discovered and explored with this new direction. The Svengali genii has been freed. Let’s see where it leads us. As Andi Gladwin comments in his Foreword to Symmetry & Parity, “A principle like the one you are about to read…will never be owned or completed by one person; there is still more to discover by looking at it from our individual perspectives, lives, and viewpoints…”

You can see the official trailer for Symmetry & Parity, here

Do stay in touch and send any thoughts, handlings and ideas along.