If there is one person who must be in this series of articles, this is Roberto Giobbi. I will use the common place and say that he need no introduction and that for sure everyone understand why is he a “must be” here in “The Magic of Notebooks”.

I think that the first time I was able to talk with him was in 2010 or 2011 when both of us were at the magnificent magic festival “Magialdia” in Vitoria, Spain. We talked about a lot of things and “notebooks” was one of the topics. In fact, one of my best memories of that days was that he was in my lecture and he “put me” in his notebook. If you have read my first post you will understand what this means to me and to everyone who loves notebooks. You can see a picture of his actual notebook on the page when he wrote about “Eureka” my ACAAN version that it is in Naypes (which, as you may know, has the Prologue writing by him).

I asked Giobbi if he could write something about the “notebooks” and he sent me something that he wrote in a magnificent initiative he did for Lybrary.com called “Ask Roberto”: 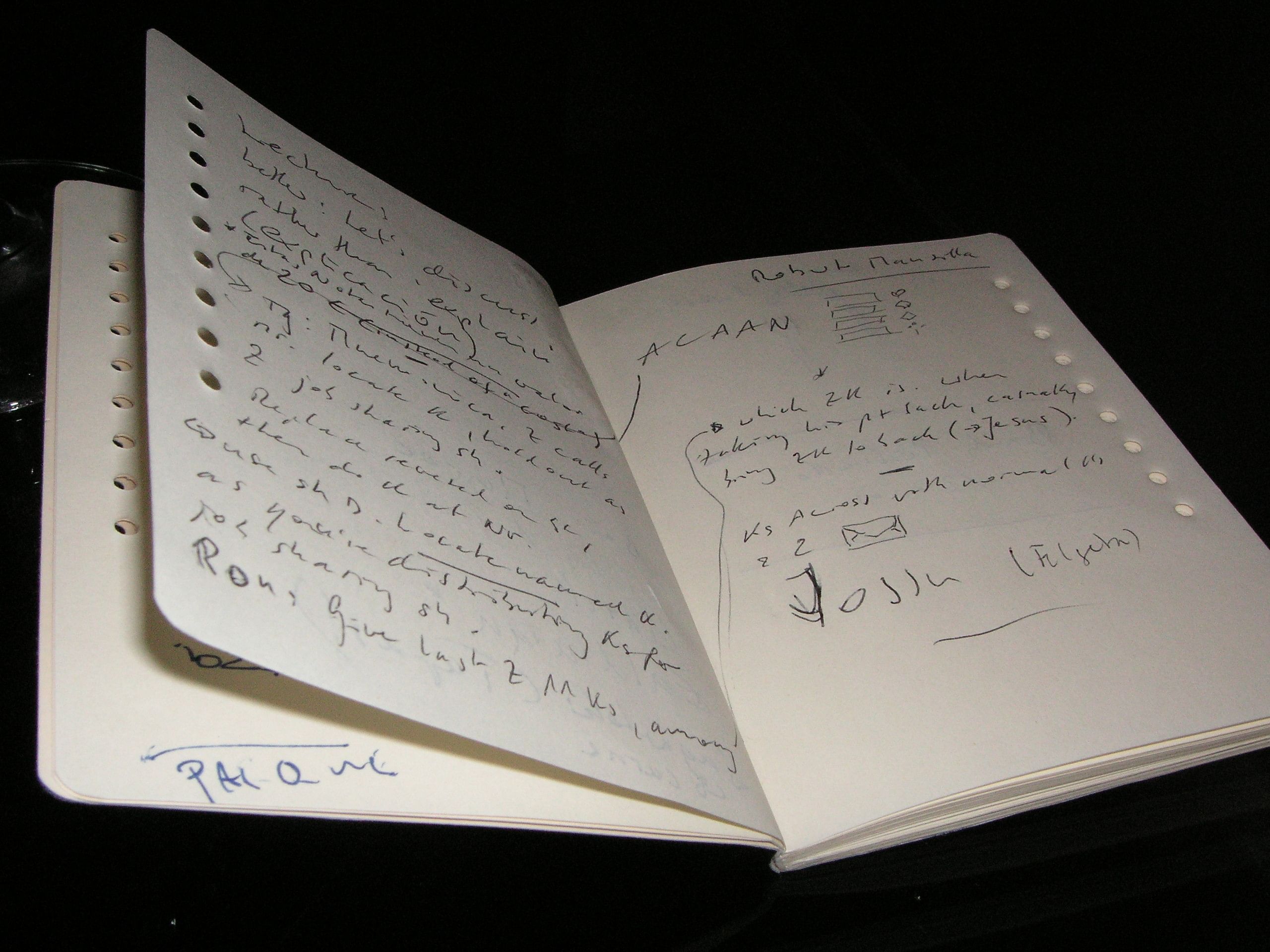 In my opinion keeping a notebook, or a journal, or having a database, or whatever combination of these means and others, is not just related with your own output and your own ideas, but simply the best way known to me to record ideas, insights, knowledge etc., regardless of whether they are your originals or that of others.

Why Take Notes?
The main purpose of taking notes, I believe, is to remember some kind of information for future use. This can really take many forms. Keeping a journal is maybe the oldest known way of recording whatever has had any meaning to the person who is keeping it. As we know some diaries are so beautifully written and stem from such important personalities, that they have formed a literary genre of its own.

Personally, I have never been able to keep a journal, although looking into my files shows that I have tried once or twice, but to no avail – I stopped after a few weeks or so. I cannot tell you why this is so. Maybe it is due to the fact that a journal is a chronological documentation of whatever has an interest to you, or that I thought it is necessary to write intimate thoughts and feelings into a journal. However, my attempts to do so lamentably failed, and when I reread my few entries, they sounded terribly trite, so I stopped.

But then again I have always enjoyed taking notes. For me making notes has been one of the most important ways of learning and storing information, especially in magic. In high school my German teacher kept telling me (and the others), “Write, Roberto, write!” What he meant was that you should keep taking notes when somebody is talking about a subject you are interested in. I was not so much interested in what he said, but that’s another story. Fact remains, that he was probably responsible for my note-taking-habit that I have kept to this very day.

Type of Notebooks
I will tell you a few things now that will make you smile. I practically always carry a little notebook and a pen with me wherever I go, and at home I have dozens of little notepads everywhere (I take the telephone notepads from the hotels…). For the past years the notebook I have been carrying has been one of those thin and flexible types from Moleskine, which usually come three in a set for about $10. This is a “transfer notebook”, i.e. I only use it to take notes on the fly, and then later transfer the notes to my notebooks at home. Below I will tell you a little more about the structure of those notebooks I have at home and why and how I use them.

This “Transfer Notebook” has about 60 pages, not much more, and is thin, maybe 3mm thick, and flexible. It fits into any pair of trousers pocket or even in the breast pocket of a shirt – this is most convenient in summer. In winter, when you might be wearing a jacket or something similar with pockets, you could have a larger notebook, of course. The small notebook hasn’t got a pen, so I need to carry that extra. In order to carry the pen, I need a shirt with a breast pocket. Therefore, I always wear a shirt or a polo shirt that has a breast pocket. My wife has strict instructions to never ever buy me anything that hasn’t got a breast pocket! I wish I was a bit more eccentric than that, but I’m afraid that’s as far as it goes…

The photo below shows one such notebook from outside and inside, as well as the pen I use, which is by the way a telescoping pen from Rotring, which is light and nicely fits into the breast pocket, but can be expanded when used. If an item is crossed out in the notebook, it means that I have transferred it to one of my main notebooks.

Of course you can circumvent all this by having an iPhone or other electronic device, and use the Dictaphone, camera and note-taking functions etc., but that’s not my thing, and here I’m simply telling you the way I do it.

When to Take Notes
On what occasions should one takes notes?
Answer: Anytime you think, see or hear something that catches your fancy. And this will depend on your interests, habits and taste.

I highly recommend that you immediately write down good ideas; otherwise, they are quickly forgotten.

You can take notes when you read a book, or you can write directly in the book. Sometimes I simply mark the text and put a cross at the books upper right corner. When I have finished reading the book, I take it to my studio, search for the crosses and transfer the relevant passages (quotes, my ideas, sleights, presentation ideas, etc.) directly into the big notebook.

You may take notes after having seen a performer live or on DVD. Many years ago, when only few people had a video player, I was invited to Max Maven’s apartment in Hollywood, and he graciously showed me a recording of Del Ray. I had never heard of him at that time, and I was speechless. Here is what I wrote in my notebook afterward: “Make it look as if you could do anything at any time. Don’t simply take out a prop, start, do the trick, and then put it away. Make it just ‘happen’. Make it look as if one thing leads to the other. Give choices to the spectators during the performance: magic according to the situation. This is also a good way to communicate and to involve spectators. Provoke situations by strategies of verbal and body language, where the spectator has to react in a certain way predetermined by you.”

One of the best places to take notes is at lectures. Having seen hundreds of lectures in the past decades, I only found few to have been really interesting to me. If you are at such a lecture, it’s of course wonderful, and you should write down everything you can. But even other lectures, which are less inspiring, do and mention things that will trigger things in your mind. And that’s the kind of interesting note. You might see the lecturer do a bad trick, not well done, he simply does to sell you something afterward, but when you wonder if you could do it any better, it might trigger an idea. Or it might remind you of a similar mistake you have been doing for years without noticing it. Immediately take a note about it and fix it when you come back.

I had the extremely good luck to grow up with people like Tamariz, Ascanio, Camilo, Carroll around me. I also met some of the best from other countries, but Spain was and still is special. Normally very good magicians don’t like you taking notes of what they do and say, because they are afraid you are going to steal things from them. That was completely different in Spain, were Tamariz had introduced this idea that the only way to grow in magic and to make magic grow is to teach each other. Therefore, I was keeping notes all the time they told me something, and they did or said intelligent things all of the time, so I was constantly taking notes. I admit I stood alone in doing that, as the others my age preferred to just listen. Each time I came back from a week in Spain I had a full notebook. I didn’t just write down tricks and techniques, as well as my own little concoctions, but also literary quotes – Ascanio was fond of quoting Greek and Latin philosophers like Aristotle or Seneca, but also modern names like Picasso, Borges or Unamuno. Tamariz recommended the first non-magic books to me, and of course I wrote all these titles down, went to the library when I came back and got the books (no amazon.com then).

But of course there are dozens of little situations that I run across every day and that I note. This can be a fancy sentence spoken in a movie, such as, “What sounds too good to be true, can’t be true” (Gupka’s law of creative anomaly in “Tomorrow Never Dies” spoken by Ricky Jay), or, “If you understand something, you don’t need to remember it”, which was a phrase that occurred to me when I read another one by Einstein, “If you can’t explain something in a simple way you haven’t understood it.” Or little sayings that seem trivial, but harbor great wisdom, such as “good is better than perfect”, or, “good is better than original” (Paul Arden).